The one SharePoint feature to annoy us all

A new SharePoint feature will email users a round-up of news they haven’t read. Charles Fenoughty, Sequel’s Digital Media Director, explains why this is bad news for you

It sounds like a communicator’s best friend. The ultimate back-up to ensure employees never miss an update. Targeted, regular, automatic – and all done without you having to lift a finger.

I’m talking about Microsoft’s latest SharePoint update, announced earlier this week. The SharePoint Auto-News Digest will automatically email users a round-up of the latest News posts on sites they follow that they haven’t read yet. It’s due to start launching in mid-June and will be available to all users by the end of August.

The official announcement says: “This is a great way for users to catch up on News that they may have otherwise missed. Only published news posts are sent in the digest, and… rest assured that users won’t see news that they don’t have permission to see.”

If you can answer “yes” to both of those questions, then you’re probably OK. Apart from the fact that it’s unbranded this won’t annoy you too much.

But then there’s Teams. Did you know that every time you create a Team in Microsoft Teams it creates a SharePoint site in the background, which members automatically follow?

And did you know that your employees can produce news in that site, which can be quickly and easily targeted to members of that Team?

In other words, if your organisation creates news on SharePoint – by official and/or unofficial sources – and uses Teams, you’re going to find these Auto-News Digests really annoying.

You’re in danger of these emails being a mess of official and unofficial news – some of which has the potential of being completely irrelevant to the reader. And in a world where we’re information heavy and time poor, it’s really important organisations aren’t seen to be adding to the noise. 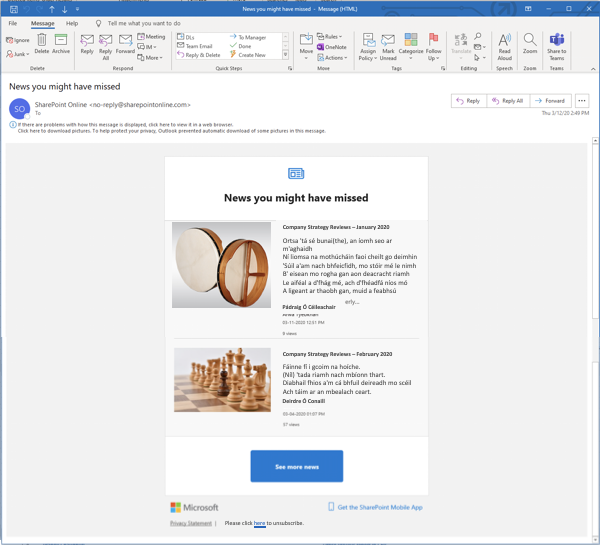 What can we do?

At the moment, there’s no setting or admin control to stop this. (Although Microsoft does point out that users can unsubscribe from the emails themselves.)

This may change soon if Microsoft take user feedback onboard – a quick look at O365 forums shows how unhappy people are already about this lack of control (have a quick look at this one if you’re interested).

Our advice is to stop the email another way – by blocking the ‘from address’ and the ‘subject line’. It’s important to specify these features and not block all emails from SharePoint. Many are useful, like notifications, access requests or invitations to new spaces.

Here are the details you need:

*Note: this is what we currently understand the subject line to be. It may differ, so keep an eye out.

Read more: IoIC and Sequel: how to stay connected in MS Teams

For more advice and support on SharePoint – and the rest of the Microsoft O365 tools – get in touch with charles.fenoughty@sequelgroup.co.uk

Internal communication as a career – redressi...

Looking back… and forward!